I love to cook and I’m excited to share what a typical experience in the kitchen looks like with me at the helm. I very rarely get to cook with total concentration. My sidekick is a real baby and usually demands attention at the worst possible moment. I’m far from being an amazing cook, but what I lack in talent I more than make up for in enthusiasm. I hope I can encourage anyone who has doubts about their cooking abilities!

On Thursday I decided to cook a new dish. I had a bunch of random ingredients I wanted to use up–previously purchased canned white beans and pickled jalapeños for a recipe I never ended up making, chicken thighs, and three leftover leaves of rainbow chard. I did a quick Google search, and came up with this White Chicken Chili. I love Pioneer Woman recipes, they’re unfussy and homey which is just my speed. I don’t follow recipes to the letter, and usually the results I get are pretty good even if the dish doesn’t resemble the original perfectly.

I put Rory in the Pack n Play and gathered all the ingredients on my kitchen counter. 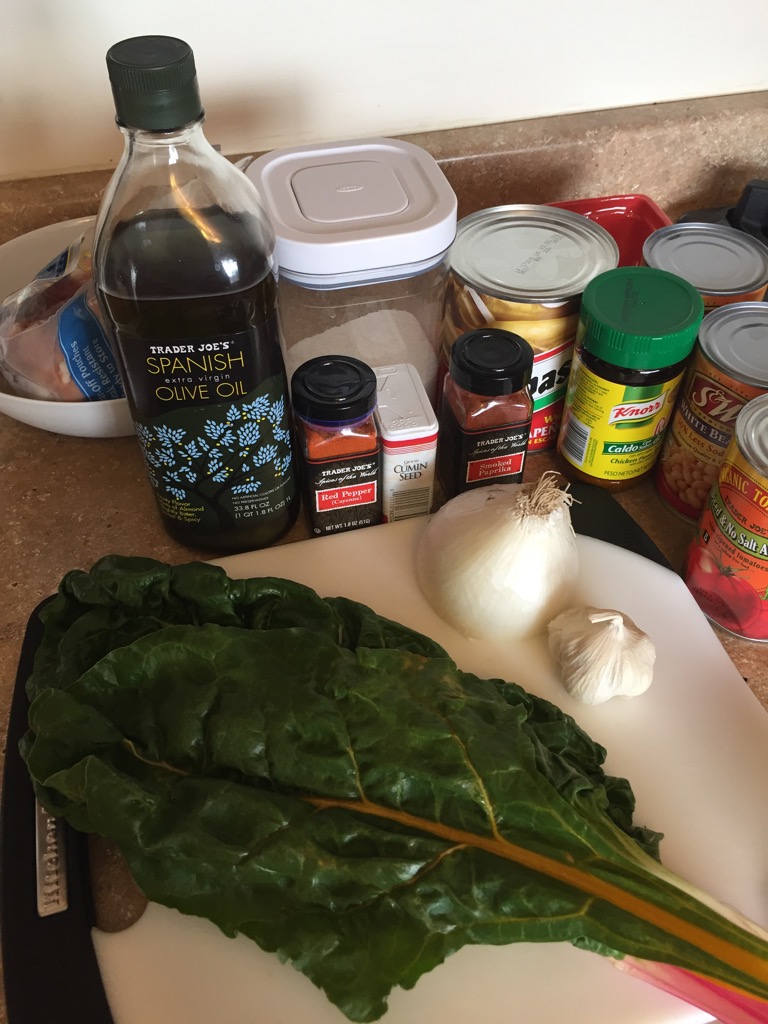 I quickly read through the steps and decided that I could confidently make the following changes:

Here’s where things got really iffy:

In my haste, I turned chili into soup. Once I realized I wasn’t going to get that thick chili consistency, I tasted the broth before adding anything else. I opted for only 1 and 1/2 teaspoons of cumin powder, and after several more spoonfuls, I decided the soup didn’t need any other seasoning. The bullion was plenty salty, and the pickled jalapeño gave it enough spice and acid.

I think the soup tasted great and so did my husband. The distinct flavors of this caldo reminded me so much of Albondigas soup or Mexican rice.  It was the perfect spicy soup for a gray spring day.

Some bread or corn tortillas would have been a nice addition, but sometimes it’s just more important to get dinner on the table than worry about all the things you’re missing. We had leftover soup on Saturday and served it with ciabatta from our neighborhood bakery.

This recipe made a large pot, about 6-8 generous servings, and from start to finish took me less than an hour to make. I froze a couple portions for a future dinner (yay!), and there’s still some left in the fridge. This is a perfect family-sized weekday meal that could also be adapted for the slow cooker.