Returning to Work, an American Horror Story, Part I

I was really scared about sharing my story, but I’ve had great support from friends and my loving partner. I wrote this piece for myself to put into words everything I felt and agonized over this last year. The ongoing lesson I’m learning is that I don’t want to make decisions from a place of fear. It’s in that spirit that I hit publish and have kept myself from running over here and hitting delete.

Around this time last year, I was headed back to work after my maternity leave. It was a time fraught with emotional highs and lows. Now, almost everywhere I turn, I read something that hits me where it (still) hurts. I recently read an interview by the New York Post with Meghann Foye, in which she promotes an idea through her novel that childless women deserve time off to find themselves, a meternity leave, a benefit she sees her childbearing counterparts have over her. I’m not going to say that the concept of meternity leave is stupid per se, because I am not against anyone getting a break from work if they need it, but I will say that Foye’s ideas about maternity leave are wrong.

Maternity leave, paid or unpaid, if you are lucky enough to get it in any capacity in the US, is hard work. Babies are demanding, including the most even-tempered of them—and nothing can really prepare you for their relentless needs. Entering parenthood is about learning an entirely new mode of survival; it’s not the idyllic or “self-reflective” time that some might imagine. While “self-advocacy” is certainly a skill some mothers learn, let’s not jump to the conclusion that mothers are confident or “sure of themselves” when they return to work, or that their workplace “provides a modicum of flexibility,” as Foye claims in her interview with Anna Davies about her novel.

I was nervous to go back to work last year, but I had never seriously considered being a stay at home parent either. I lacked any sort of models in my life of what that might look like. Simply put, dual income households were all that I knew. I prepared by doing my research and following helpful checklists provided by many bloggers. My first major hurdle was lining up child care when I didn’t get my first choice at the conveniently located campus daycare, though I’d been on a wait list for almost a year. I opted for an in-home provider about four miles away from campus, thinking that I could make the trip there and back during lunch to see my son and nurse. I had heard from so many working mothers that finding childcare close to the office was key in making the transition back to work a relatively happy one. After that, I made freezer meals, practiced with my breast pump, bought postpartum work clothes, gave myself an at-home mani-pedi, and packed up all my essentials in a new little bag. I was as ready as I’d ever be.

I knew that going back to my office would be difficult. The dynamic had changed substantially with new leadership and staff changes, but nothing could really prepare me for the reality of what that would mean as a new mom. My whole first month of work was a comedy of errors—it started with needing to queue with dozens of others just to get my parking privileges reinstated, having to pump breastmilk in a common room with only paper signs providing security because the mini-blinds I’d doggedly requested for months before my leave were still not ordered (and when they did arrive were the wrong size and my fourth floor window was broken during the installation), organizing a massive clean up of the 4×4 office kitchen because it was Kitchen Nightmares‘ level of filthy, and having so many mistakes on my paycheck that I became a frequent visitor at Accounting (and probably should have received one of those frozen yogurt punch cards because at least then I would have gotten something free on my tenth visit). Those things were all stressful, but the absolute most gut-wrenching thing that happened was on my very first day back. I asked my new supervisor if I could leave ten minutes early, and she asked me why. Why do you need to leave early?

Why? WHY??? I felt flames on the side of my face. I needed to leave early that day and would probably need to on others for the same reason—my child. I was parked a quarter mile away from my office since I’d been at parking services for over an hour (see above) and by the time I had a permit all the closer lots were full. I was responsible for drop-offs and pick-ups and there was no margin for error. You have to pay fines at daycare if you’re late, on top of the incredibly hefty monthly price tag (think mortgage payment or college tuition).

Next she asked when. When are you going to make up your time? I had no real way of making up my time—I had allotted my lunch breaks for seeing my kid to nurse, and if I stayed at work instead I’d still need to take another (unpaid) break to pump breastmilk. I couldn’t come to work earlier or stay later because I had to do the pick-ups and drop-offs (see above). So what could I say? I had no answer that would be acceptable. I mumbled something and darted out of the building, embarrassed and truly worried about my future as a working mom. 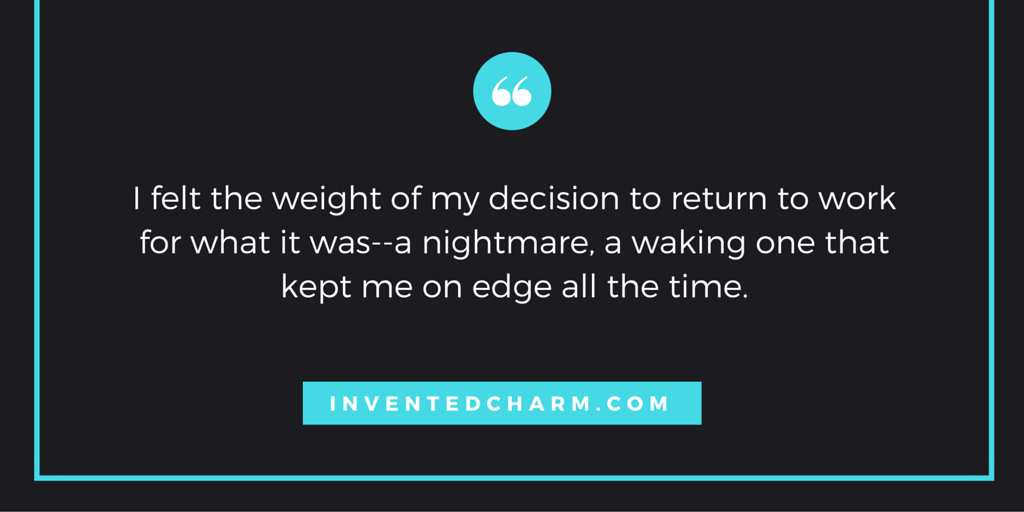 I felt the weight of my decision to return to work for what it was—a nightmare, a waking one that kept me on edge all the time. I couldn’t sleep, I felt sick and anxious at night and on the weekends because I was scared to go to work. What if I was late? What if I had to leave early? What if someone needed me while I was pumping breastmilk? What if I hadn’t anticipated the needs of everyone else around me like I used to before I had a child?

I felt alone, and everyone I turned to was in a different (and sometimes) slightly better situation than me. I talked to women who were in positions of authority and I found that they largely got to make their own rules about their schedule. I talked to friends who had very flexible supervisors and cooperative units that did give them the “modicum of flexibility” to work from home a couple hours a week or clock a few hours checking email on nights and weekends. I had friends who were able to work part-time, and had a family network of support for childcare. I had none of those things in my favor, so I clung to the idea that it would get easier with time. It didn’t.

This is just part of my story, but I’ll end it here for today. I’ll leave you with this beautiful rant from People I Want to Punch in the Throat. Read it and laugh out loud like I did.